We live among people, we pass them everyday, we spend time in the same places, we travel together, often for the same purpose. Often we not only observe the crowd, but also are a part of it. We pass people by, but we only see silhouettes, sometimes a detail catches attention.

Societies are growing, we are living in increasingly large groups, and communication between people has become easier than ever before. However, the results of research on loneliness say that one in four people feels lonely and has nobody to talk to on important issues 1 . So what affects the common sense of loneliness? What role does the quality of relationships play in our lives?

In my work, I wanted to show two worlds with which we collide every day. On the one hand, the crowd (the buzzing mass of people) we are part of, on the other, the inner world of every person who is reached only by selected stimuli from the outside, who is a self-focused observer of the crowd. 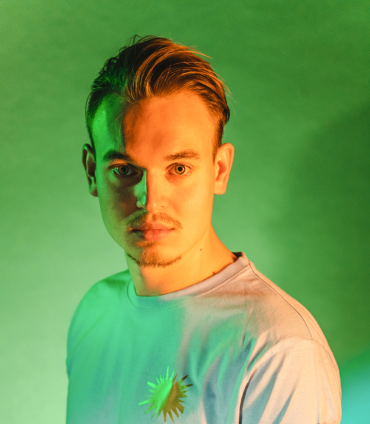 (born 1994)
Studies: Faculty of Graphic Arts at the Academy of Fine Arts in Warsaw (2014–2019) and at the Hungarian University of Fine Arts in Budapest (under the Erasmus+ programme, 2018). Scholarships from the Rector of the Academy of Fine Arts (2017–2019) and Minister of Culture and National Heritage (2018). He works in printmaking, photography, painting and installation. Many solo and group exhibitions, including Metaphysics of the city, Platán Gallery, Polish Institute, Budapest (2018); Metafizyka miasta, Hungarian Institute of Culture, Warsaw (2019). He collaborates on the implementation of the EU grant as a graphic designer at EMOTIN.