The Residue project includes three videos showing the impact of man on the surrounding matter and the subsequent dispersion of the effects of his actions. Each shot presents situations right after the interaction between a human being and the environment and space. My project refers to various activities: passive – constant pressure exerted on the surfaces in contact with the body; involuntary – such as leaving behind warmth, and active human action, which results in having a visible impact on the form of the surroundings.

The idea of the work is a visual representation of the human – object – world relationship. Objects have properties that allow them to preserve and remember our energy. In each of the presented cases, the trace of human action disappears and the energy transferred to objects is dispersed. Its disappearance is caused by the force of entropy, which constantly affects the world. The temporality and transience of the traces remaining after human interaction is a key message of this piece. 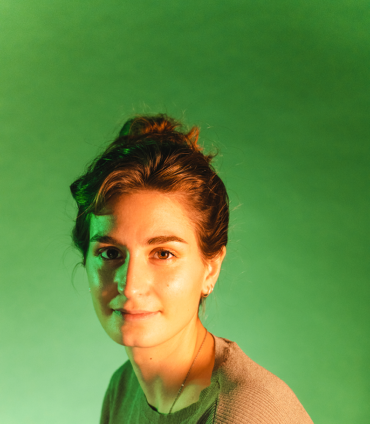 (born 1995)
Studies: Faculty of Journalism at the University of Warsaw (2014–17), Faculty of Media Art at the Academy of Fine Arts (2017–2019). Fields of artistic activity: photography, video, graphic and computer design. Winner of the main prize in the debut category at the VMA Poland festival for the music video for Julian Uhu’s song Aha (2018); nomination in the category of visual arrangement of space at the YACH FILM Polish Music Video Festival for the same video (2019). Solo exhibition Jedyna taka, Pin Up Studio, Warsaw (2017).